Ever feel like that ever-growing backlog of un-started or un-finished files has a life of its own? It can be hard to make progress on it, especially while clients keep calling, new requests come in and staff are busy creating backlog reports. You bring in temporary help to fix the problem but it doesn’t help and you’re left with low staff morale and an even larger backlog. If only you could blow up that backlog.

Others have and you can too – here’s how.

Lean thinking provides dynamite to clear away the spiral of steps leading to backlogs and prevent them from coming back once and for all. 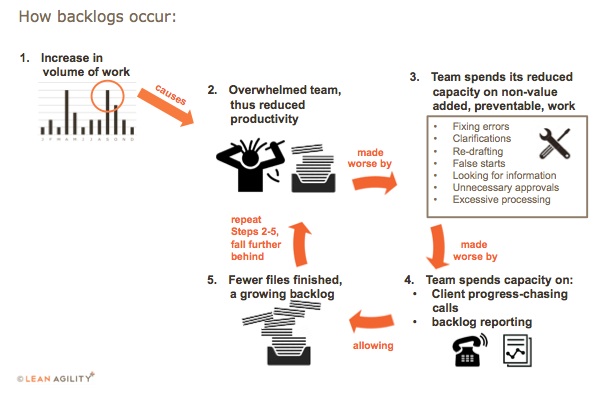 In Lean, variation in demand is one of the key “wastes”. I coached a public servant from a provincial Ministry of Transportation who had taken a Lean Facilitation course that I co-instruct. He was working with a program area process that granted renewals of permits for businesses to operate commercial vehicles. They had a backlog of over 4,000 files and a 90+ day waiting period to process renewals. Staff were stressed and clients, anxious to keep their businesses running, were unhappy with long delays. One of the causes of the backlog was a variation in demand for permits during high seasons: April, when landscaping companies prepare their trucks for the new season and September, when snow-clearing companies do the same. Try as they might, staff in the Renewals process could not deal with this sudden increase in demand and built up backlogs that they tried in vain to reduce before the next peak month hit.

Note that the seeds of backlogs are not only planted by unaddressed “high seasons”. An unanticipated reduction (or variation) in the number of staff available to perform the work can also lead to a backlog. Either way the unaddressed variation in incoming client demand or supply of staff to do the work, is where the spiral begins.

What can you do about increases in demand?

Variation in demands creates a backlog which leads in turn to Overwhelm (or unreasonableness), another cardinal Lean waste. When unaddressed increase in volume (or unaddressed decrease in staff availability) hits, it hits staff hard. The natural physiological response is “fight or flight”. This response served us well long ago when the sight of a tiger in our cave triggered our brains to release cortisol and epinephrine boosting us to outrun the tiger, or at least outrun another human. Sadly for modern knowledge workers, these same hormones short-circuit the deep thinking parts of our brain required to do the highest value added work. The only remaining brain function unaffected are the taxonomic functions – making to-do lists – but not actually starting the tasks in the list. The effect of this is to reduce productivity just at the moment when individuals and teams need to be at their most productive.

How can you reduce overwhelm?

Preventable work, such as correcting errors or clarifying information, causes an unnecessary interruption to the process exacerbating the problem of backlogs. John Sneddon calls this “Failure Demand”, demand on resources caused by a failure to do something, or do something correctly. By examining the profile of incoming calls, the renewals team in our example discovered that the permit application forms were difficult to understand. Once they redesigned the form to be more user-friendly, and to reduce errors and clarification, a major proportion of the preventable work disappeared and presto, their capacity to reduce the backlog increased.

How can you reduce Preventable Work and the Eight Wastes?

Unhappy clients make phone calls or send emails to complain and ask for a status update on a file. This is pure preventable work created mainly by a failure of the process to deliver the final output as quickly as the client needs it. By speeding up the process, and using freed-up capacity to swiftly complete the job, you can reduce the number of incoming calls and blow up the backlog spiral.

How can you reduce the effort on Client progress chasing calls and backlog reporting?

Blowing up a backlog is usually a function of addressing three major factors:

Unaddressed increase in client demand or decrease in workforce supply which causes
Overwhelm, reducing productivity which is lowered further by
Preventable Work and non-value added activities which together cause a downward spiral of growing backlog and despair.

Eighteen months and several peak periods later, the team in the permit renewals process delivered renewals in three to five days, and the backlog has not returned. In fact, they found the inspiration and capacity to eliminate a backlog of over 1,000 files in a second process, reducing the waiting time for a permit for a first-time applicant from one month to a couple of days. All without investing in technology, headcount, or working harder.

THE EIGHT LEAN “WASTES” THAT CAN CAUSE PREVENTABLE WORK:

Originally published in the January 2016 issue of Canadian Government Executive.